Plan d- celebrates it's 10 year anniversary with a festive, interactive festival with the best of plan d-.

Special for this birthday celebration a number of the successes (of previous years) will be performed again, like See Heroes, Circus Santa Sangre, Friends in Winter, Friends in the Library, Friends in the Country and Sophie.

The MINI festival starts wiith a performance of Sea Heroes 19 October in the Bijlmer Park theatre in Amsterdam. Then we move to the Hague, 24 to 26 October, performing Friends in the Country, Sea Heroes and Circus Santa Sangre, during the Betovering (Enchantment) Festival in the Nieuwe Regentes theatre.

The mini-festival is a festival for the whole family, young and old, with performances and a wide range of activities in which children can play and be creative. With a lot of dance, theatre and fun! 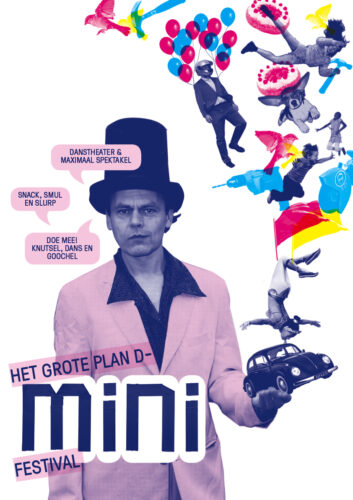