Friends in the Library (5+)

An ode to the world of books and the power of imagination.

The two neighbours/friends are sitting together in the library. One is immersed in a computer game, the other is watching films on his ipad. Surrounded by towering bookcases the two friends are lost in their own digital world. But then all of sudden the computers crash. What now? They go looking for electricity. And then all of a sudden they see they are surrounded by hundreds of books. They are curious, what’s in all these books. And how can they get to the top shelf? It’s time for exciting discoveries in the library! The neighbours climb up the bookcases, slide down again and manage just in time to stop the bookcases from falling over. They open several books, get lost in fantasy worlds and bring wonderful pictures to life. They read, the look, they listen and dance between the books. In no time the library turns into a place of chaos and fun!

Friends in the library is the sequel to the successful production of Friends on holiday and Friends in the winter. In this performance in music and dance the friends celebrate the book, stories and  the power of imagination. Of course there is a lot that goes wrong in their world but the friends know how to solve all the problems in their own wonderful inimitable way. 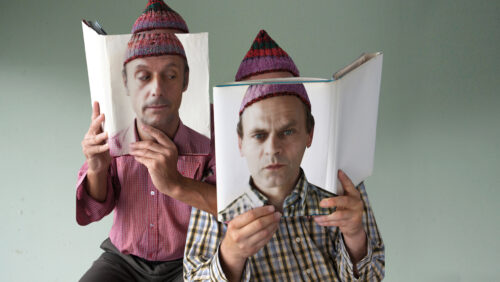 Friends in the Library

'The play surprises from the beginning till the end. The fluent and lightly absurd dancing skills of the two are completely integrated in the scene decoration of books.' ‘When the power of association is in overdrive the slapstick timing of both dancers really connect and the physical powers of invention rise to an impressive height’.

Friends in the Country (5+)