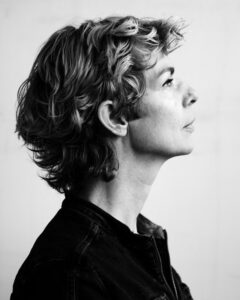 Esther de Boer studied at the Gerrit Rietveld Academy in Amsterdam and graduated in 1999. Since then she has been a freelance graphic designer with her business Es & Zn creating graphic design in the broadest sense of the word. Moving pictures, photography, posters [a number of the posters made for plan d- have been nominated for the Theatre-poster prize] , websites [together with website builder Ehud Neuhaus] and books [including a book about sex education for young people which won the prize for the best presented book in 2017]. Everything in a recognizable clear definite and individual style. Esther works a lot for performing arts.
It is a rewarding challenge to work for plan d-. Especially rewarding is making posters for plan d. Andreas active with all sorts of unusual props, ties frozen in blocks of ice, a gas stove going up in smoke and helmets made from copper flowerpots. All this backed up by Hedwig.
Andreas, Hedwig and Britt are my team. Resourceful, loyal, passionate and just plain very nice.