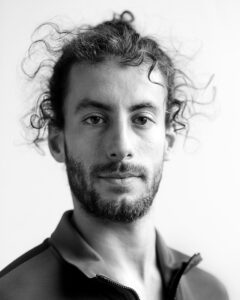 After his Bachelor and Master as engineer in nuclear energy Carlo went to study at the Codarts Rotterdam Dance Academy from 2013-2015. Besides his study and dancing Carlo is also passionate about music which led him to study the piano for eight years at the conservatory.
While still at the dance academy he danced at Introdans and in projects with Lonneke van Leth. After studying dance he worked with ICK Amsterdam, Itzik Galili, Jenia Kasatkina and via Korzo, in projects with Jitty Chompee, Wubkje Kuindersma and Ryan Djojokarso. He also worked on location in projects with Dansnest and with Vloeistof Dans. Recently he has danced in several performances for children with Ryan Djojokarso, Gaia Gonnelli and Marieke & Ton Koopman.
Because Carlo enjoys working on location immensely and for children it was logical that he should come in contact with Andreas Denk and this season he has danced in several performances with plan d-.